Will only work for users who can setup Binance accounts. Requires minimal Syscoin RPC knowledge. Deliverable is a NodeJS script; requires knowledge of how to run scripts.

To vote in support of this proposal:

Hey @tmux, you are pretty new to the Syscoin community and I think everyone appreciates fresh new faces

I believe the Syscoin community would highly benefit from getting more information about you. IE: Who you are, what projects have you worked on before, how you learned and got interested in Syscoin.

Hi @Sebastien thanks for the welcome. I’ve been following SYS for a while, lost touch for a bit when things moved from Slack to Discord and some other network changes were happening at the time as well iirc. I’m a fullstack developer, work with mostly enterprise organizations but have been spending spare time getting more into crypto projects. I like Bitcoin, and I like Ethereum, and that sort of renewed my interest in Syscoin which now seems to have a lil better tooling for working with it so I figured I’d take a stab a decentralized gov. to see if I could contribute in ways that I felt were valuable as a holder myself. 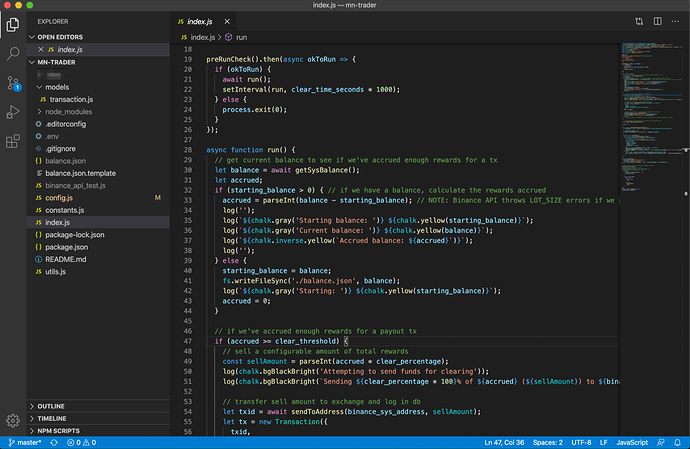 @tmuk It is great to see another developer showing up in Syscoin! And, i wish i could support the current proposal as I definitely would like to see you contribute to Syscoin! But given the content and the limitation of the proposal I am hesitant to support it. For one, the currently low market prices undoubtedly affect work of the SDMT and the Syscoin Foundation, hence a bot encouraging selling SYS may not be in the best interest of the project at the current point in time. Furthermore, the proposed BOT is limited to Binance account holders and is also limited to users with JS skills, excluding a substantial part of the community, including the writer. Should the proposal not pass, I really hope you will submit further proposals that I can full-heartedly support!

Hi @MooBaa thanks for your feedbac. Love your site by the way! I vote for it every month

. I wanted to address a few points from your reply:

But given the content and the limitation of the proposal I am hesitant to support it.

Can you please elaborate? I feel my proposal is more detailed and clear in what will/won’t be delivered than other proposals asking for much much more funding with many more votes. Tell me how I can improve the proposal.

hence a bot encouraging selling SYS may not be in the best interest of the project at the current point in time.

That’s a matter of opinion. Having the bot is one thing, using it is another. Creating more exposure for SYS by developing the bot in a way that other MN projects can use (PIVX, DASH, etc) can also bring more awareness to SYS itself.

Furthermore, it could be used as a tool by the community when needed. Perfect example is how SYS/ETH was recently delisted from Binance due to low volume. MN holders could have activated the bot temporarily to increase volume and avoid us losing the listing pair.

Furthermore, the proposed BOT is limited to Binance account holders

Binance is a starting point because it has an easy to use, easy to setup API that doesn’t require KYC and has high BTC withdrawal limits even with no-KYC. Once released the bot could easily be extended to support other exchanges, target selling on exchanges based on depth/volume and a host of other variables.

and is also limited to users with JS skills, excluding a substantial part of the community

JS skills is an overstatement. Its just ‘run a JS script’. Javascript appears to be one of, if not the primary scripting language Syscoin team uses alongside python. Just look at the syscoin and BCF public repositories. Many of the masternode-setup guides require running/knowing how to run scripts. A majority of the repositories are NodeJS, Typescript, or Vanilla-JS based. Using JS fits with the skills existing devs in the community have enabling more users to contribute to the tool’s evolution.

The README that will be included in the deliverable of my proposal would both include instructions on how to install NodeJS (Win/Mac/Linux), How to install MongoDB and how to configure and run the bot (its a single line command).

I don’t feel this is a strong reason for voting against the proposal and sets a precedent that all governance-developed tooling needs to be consumer-grade which will lead to more time and cost when a good set of instructions can do the job just as well for 100x less time and cost.

Thank you for the feedback and with some more input from you I’m hoping to close the gap on making this a proposal you can support.

I’d also like to add that the idea here isn’t for 1700 masternodes to start selling 100% of their rewards all day, every day. This is a tool to give masternode operators more options in how they take delivery of their reward payouts. There is also the possibility to enable the bot to do buying as well. So MN operators could potentially use to to sell at X with automatic rebuys (using the BTC resulting from the prior sale) when price drops by n%. Create support on the market.

Tools like this create more value and incentive for masternode owners / owning a masternode and they also contribute to the larger masternode-ecosystem in ways that both Syscoin and other projects can benefit from both in respect to functionality and general project awareness.

I think it would be nice to have even more configurability such as min/max sell values, volatility protection heuristics, support for additional exchanges and more. This is my first proposal so I wanted to keep the cost and scope realistic and something I know I can deliver fully on time.

I am making excellent progress on the bot even given then uncertain status of my proposal getting funded.

To that end I will commit to releasing the first version of the both within 10days of the voting closing if my proposal is funded. I will also commit to iterative improvements and new features within reason for the remainder of the month of June 2020.

Really doing my best to try and get my foot in the door by getting my first proposal funded and delivering on time, and beyond expectations since the the additional features/improvements I mentioned above are outside the scope of the proposal.

This hasn’t been asked yet but I feel like it should have been:

‘what will you do with the funds?’

Honestly I am trying to get another masternode going. I have no immediate plans to sell in order to cover my costs. I’ve been investigating the SYSETH bridge quite a bit recently and this project is a true gem waiting to be discovered.

If I get this proposal funded looking into ways I can make bridge easier to use, possibly natively integrated into a wallet or providing a library that lets others integrate it into existing Ethereum wallets quickly and easily etc.

We’ll see how this first one goes, appreciate the supporters out there

Thanks so much for you detailed and thoughtful response - and i am definitely warming up to your proposal of a SYS trading bot, despite the fact that i don’t anticipate that I will ever use it! As you say, lets hope this will be just your initial contribution, hopefully to be followed by more substantial work!

Appreciate everyone’s feedback. DASH community sees value in this idea so some folks over there have agreed to fund its development for DASH with some additional requirements if that’s the only way it can happen.

If my proposal gets funded via SYS then Syscoin will be the code’s home and it can be extended for other uses from that base.

Are you planning to propose this governance cycle?